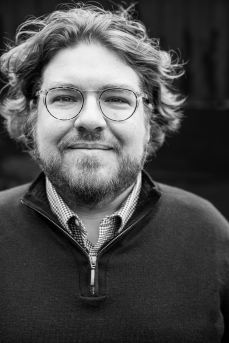 James Brubaker is from Dayton, Ohio, originally, but now teaches and lives in Missouri. He is the author of Liner Notes (Subito Press), Pilot Season (Sunnyoutside Press), Black Magic Death Sphere: (Science) Fictions (Urban Farmhouse), The Taxidermist’s Catalog (Braddock Avenue Books), and a number of short stories that have appeared online and in print. James is also the director of Southeast Missouri State University Press and the editor of Big Muddy. Before that, he was a founding and associate editor of The Collapsar (2013-2017), and served as music section editor of The Fiddleback for that journal’s entire run (2010-2013).