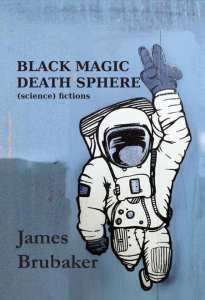 In Black Magic Death Sphere: (science) fictions a young man cites his obsession with the creation of alternate universes as a rationalization for not answering his girlfriend’s marriage proposal; James Franco travels to the edge of the universe where he meets a slightly different version of himself with whom he lives out the rest of his life; a man, snowed in at his hotel, meets a future version of himself who has questionable intentions; and the famous Schrödinger’s Cat thought experiment comes to life in the form of a Choose Your Own Adventure story. These are just a few of the genre-bending tales contained within this weird, funny, and anxious set of mind-blown and  broken-hearted science fiction stories.

Fiercely original, obsessive and witty, Black Magic Death Sphere: (Science) Fictions includes stories about time travel, space, teleportation, video games, with metafictional narratives and a Choose-Your-Own-Adventure story that bolsters my belief in the art of fiction. James Brubaker is a trickster and I love it. Go read him right now. —Brandon Hobson (author of Where the Dead Sit Talking)

Funny, irreverent, steeped in pop culture and sci fi and sprinkled with general weirdness – this book is clever and great and awfully fun to read. I’m glad it will be out soon, because now I want to talk about my favorite bits with everyone I know. —Amber Sparks (author of The Unfinished World and Other Stories and May We Shed These Human Bodies)

Brubaker’s short stories travel across time and space, but never lose touch of the human moments. These are worlds where the disorientation of aging might be explained by the multiverse and a galactic anomaly makes space adventurers remember the favorite taste from childhood. Open this book and let Black Magic Death Sphere transport you away.  —Lincoln Michel (author of Upright Beasts)

James Brubaker’s stories are deceptively playful. You’ll get hooked by the clever story shapes and the games, by Brubaker’s gumption to take us on rides into perhaps alternate timelines with people you think you already know. But you’ll stick around for the emotional heft in these pages. Black Magic Death Sphere will make you feel less alone in being worried about our universe. —Jennifer Howard (author of You On Mars: Failed Sci-fi Stories and How To End Up)

James Brubaker’s fiction abounds with surreal juxtapositions, unorthodox perceptions of reality, and more doppelgangers than you and your mysterious double can shake a stick at. The stories in Black Magic Death Sphere fall somewhere between the metaphysical inquiries of Stanislaw Lem and the heady metafictional jaunts of Charles Yu—in other words, smart fiction that leaves both the heart and the brain affected. —Tobias Carroll (author of Reel: A Novel and Transitory)